We pushed ourselves (Henry Foken, Sarah Foken and Melissa Ming Aguillera) in the midst of passengers as I sighted an Igorot lass down the steps. Coming from Berne, Giuliana, Henry’s oldest daughter arrived earlier than us.

Outside the train station premises. Telephone calls. Rebecca Bernet instructed us where and what bus to take. Bus Nr. 1, stop at Jardin Botanique station. She was waiting for us near the gate when we reached the place.

The group is in their final rehearsal. Jenny Liagao, the dance choreographer, could hardly raise her voice giving the choreographic instructions so with Rebecca Bernet, who took the lead when Jenny made a pause. (Rebecca und Jenny gestikulieren, gaben Anweisungen. Ein grosser Applaus für ihre Bemühungen, die verschiedenen Tänze choreographisch miteinander zu kombinieren). see: The Stage (Rebecca and Jenny were gesticulating pointing here and there, giving instructions. A big applause for their efforts choreographically mixing the different dances.) It’s a little bit chaotic. The plot choreography is there but to tell the group how the entrance should  be, the Pattong, the Banga dance and Takik need discipline on the side of the dancers. Jenny and Rebecca mastered their part. Although the Geneva Igorots were not present in Rübigen and Dübendorf, the group practiced their part very well such that Jenny and Rebecca only say where and when they start their dance part. The Geneva males inserted themselves in the middle of the other gong players and with the words  „mabalin, kaya tayo dayta“  (yes, we can do it), beat the gongs that walkers can’t avoid but to stop and watch the rehearsal.

A pair asked what country these dancers came from. The prompt answer: ‘’ From the Philippine Cordillera…Igorots’’.

Ricewine offering. Henry made the piltik then we parted in several groups for the venue.

The others were not in sight so we stationed ourselves (Sabina Kuenzi, Henry, Sarah, Melissa, Giuliana, Jade Dalis, 4 from Geneva) under a tree when I heard a microphone call,

“All banner holders should come together infront“.

Henry and I acted immediately. I asked Sarah to wear her costume. Claudine Bernet was not around so Henry asked Melissa to pair with Sarah (Melissa is a friend of Sarah) so with Giuliana. Uncomplicated and without hesitation, we helped them wear their Bontoc attires.

‘‘Daytoyen a ti mausar‘‘. (This is what will be used.) Sabina brought out her banner.

They left following the microphone’s instruction.

Through the assistance of Sabina and Nora Schöpfer and a short discussion with the MC, (We are here, why did you not announce BIBAK Switzerland?) the BIBAK group represented by the young generation, Sarah and her sister, Giuliana, joined the parade proudly holding the BIBAK banner.

‘‘Ulay. Dey inmeyda han babbalasang. Inuharda banner Sabina. Idulinmo kahin ta adi kalitaw‘‘. (Never mind. The ladies went. They used the banner of Sabina. You may keep that so it won’t get lost.)

(Ric Kilongan came with his car transporting the BIBAK belongings but to seek a parking lot during this time is difficult. This is the reason why they [ Ric and co.] were not able to make it on time to give the banner).

Some of the group arrived and wore their costumes under the tree, too. Just in time to be in the dressing room for preparation. One last instruction then the BIBAK participants lined up through the narrow stairway waiting for their call. Athough it’s hot, some are humming, singing, joking each other. The group is very well motivated.

“Let’s show them and do our very best.“

Walking through an empty room, I found myself in the hall and could sit in the first row together with Giuliana, who already prepared her video camera to document the Igorot dance number. A few minutes later,  the MC announced the  name: BIBAK Switzerland.

A long loud applause as the banner holders, Sarah and Melissa, appeared from the stage corner followed by the Igorot dancers, well concentrated in their dance choreography. Shouting and shrills from the audience. You can feel and see the excitement of the public. An Igorot can feel the Igorot pride, how nice our dances and our costumes being well presented. Many from the audience stood up as the sounds of the gangsas (gongs) echoed through the hall.

The Pattong is only a warm-up. The men appeared beating their gongs and after some round-ups, the first group of women appeared dancing following the men.

The Igorot culture is alive. Geneva, here we are. 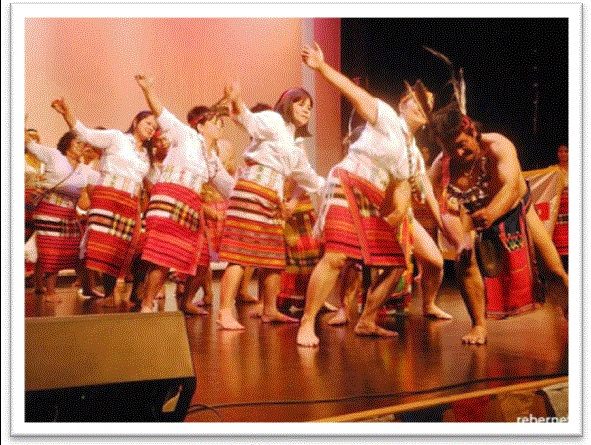 The Geneva Group dancing the Pattong

Then an acoustic signal. The Kalinga dancers came in, the pots on their heads for the Banga Dance. The Pot Dance. Graciously swaying their bodies, small careful steps, their hands outstretched, hands on their waists balancing the burden on their heads. One pot, 2 pots, 3 pots, 4 pots.

Their dance gave life on the stage and their warm-colored attires caught the eyes of the public. The Pot Dance is unique and is seldom seen here. What a blessed afternoon. 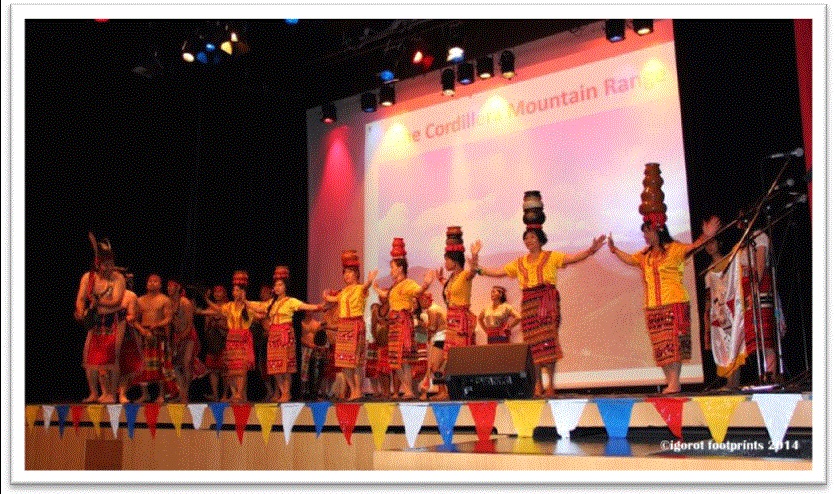 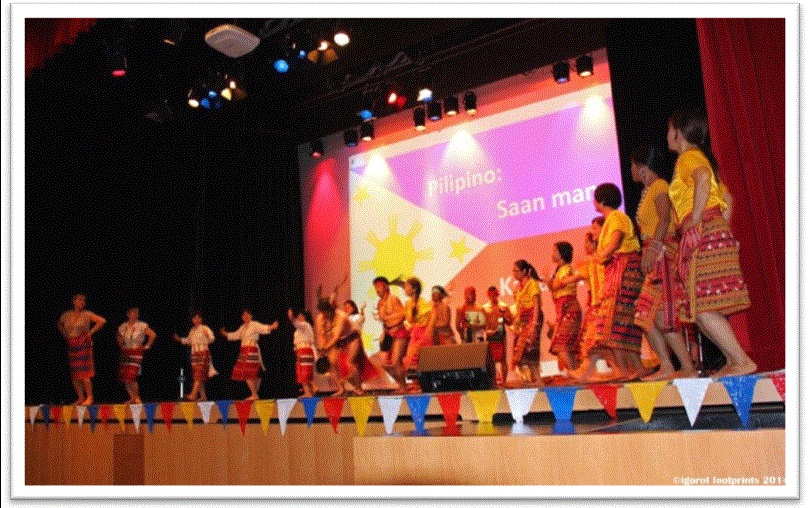 The BIBAK Dance presentation was the highlight of the

‘‘Sana, next time sasali ulit sila. (Hopefully next time, they will join again.)

‘‘No wonder, ayaw nilang may ibang grupo na sasayaw sa sayaw nila. Nasa kanila ang instruments at sila talaga ang original.’’  (No wonder, they don’t want other groups to dance their dance. They have the instruments and they are the original.)

These are the positive critics I heard behind me and I’m proud of it.

Then an abrupt change of the music. Our solibao man, Ric Kilongan, percussioned his instrument and the echoes of the solibao and gangsas vibrated through the hall. The Takik. The fact that the Geneva group not once practiced with them, had danced their part professionally. The Bontoc dressed women in rows, hands and footsteps synchronized, so with the gong players giving the stage more life. Each one of them did their best.

Bong, bobong, bongbong. Tang, tatang, tangtang. Solibao and the gangsas. Just imagine that you are in your hometown in the midst of Begnas tradition.

Time is up. The sounds of the Solibao and the Gangsas slowed down followed by an unending applaus.

BIBAK SWITZERLAND made it again.

Giuliana and I went out through a curtained door and found the group outside. Perspiring and thirsty but happy and contented from their well presented programme.

What they need now are drinks but the obligatory picture-taking comes first.

A Tagalog-speaking group asked politely if they could make a picture together with the group.

‘‘No problem‘‘ came in unison.

Gathered again under the tree, the group relaxed. Everybody is happy. Congratulations here and there.

Later, the Geneva group brought the food which they prepared for the group, rice, meat and dessert, drinks inclusive. The food, more than enough for everybody. Nabisin kami nga immay ngem nabusbussog kami nga nagawid. (We came hungry but we went home satisfied.)

With this humble and generous gesture, big thanks to you, Geneva group. 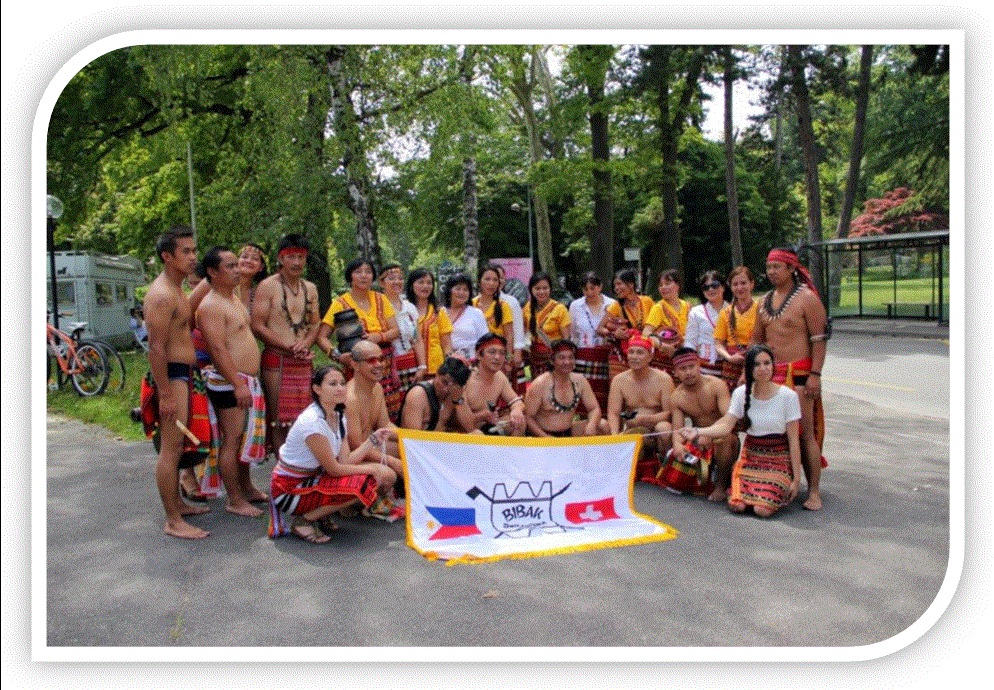 ‘‘Consume the calories,“ I murmured and asked Ric, Henry and Jade to hold the gongs so with the other men followed by the dancing women. The sounds of the 9 gongs were so loud that people came to watch  the dancing Igorots. Naipapas ti naggangsa ken nagsala. (We were contented beating the gongs and dancing.) What a joyful afternoon.

Some of the members already departed for home when a man in Barong Tagalog approached us.

‘‘I would like to say my thanks for joining. Your dance presentation is very nice.

Many thanks to you all.’’

Wow. What a compliment. (Our mistake was, we didn’t ask who he is. Is he from the organizer’s committee?)

To the Geneva group for the prepared food.

Friends, relatives and visitors who came to give their moral support to the group, in the name of BIBAK SWITZERLAND, we thank you so much.

To Sarah, Giuliana and Melissa.

To the choreographers and dancers.

To Irene Marconi and co. who were left under the tree to watch the belongings of the group. (Kitaen minto idiay You Tube.) [We will watch it later in the You Tube.]

To Ric who transported the instruments and the other needed things.

Present or not present, members or not members, officers or not officers, each has their own contribution for the success of the group here in Geneva. Big thanks.

(When I write BIBAK Switzerland, I mean all those Igorots [full and half-Igorots] who are in this PID [Philippine Independence Day] including those, with reasons, who were not able to join in this PID 2014 occasion.)

At the Geneva train station, we parted in different directions. Giuliana going back to Berne; Fred Labfayong, Jade and Baldo to Zürich; while Henry  and daughter Sarah, Melissa and I took the train to Visp.

We talked about the group’s presentation and the girls were happy about their day’s experience. And we are all eager to see what Giuliana filmed when Henry put it in ‘‘You Tube‘‘.

After 2 and a half hours, we stopped in Visp, Melissa going out one station before us. Father and daughter have only a walking distance to their home but my trip still continues.

I took the regional train going to Zermatt to stop in St. Niklaus, the endstation of my trip. I sat beside two young giggling girls so I closed my eyes and let the day’s happening like a movie pass through my mind.

Slowly, before I stood up, I took a sheet of paper and wrote down the words:

BIBAK Switzerland and the Philippine Independence Day 2014, Geneva CH. A nice title for an article.

Violeta Passerini-Dianos was born in Baguio City and lived her first seven years in Binanga, Itogon, Benguet. At the age of eight, her grandfather came to fetch her and her two brothers and brought themhome to Busa, Sabangan, Mountain Province,‘‘ta huluenda han ugali tako’’ (so they will learn our customs), was  his reason.

She finished her high school in San Alfonso High School in Sabangan. She lived in Busa until she got married to a Swiss in 1977.

In early 1978, she came to Switzerland where she and her family are living now. They have four children and a 13 year old grandson.